TL,DR: People think in averages, not sums, So, increase the average value of your offering, instead of its total value.

Think about a successful sportsperson. Say, Michael Jordan. He had a fantastic basketball career. But not many people know he had a lacklustre baseball career. And suddenly, your respect for him takes a hit. Even though, he is overall better as he probably has more skills than other basketball players.

This is not just a thought-experiment. Here is a research paper which investigated this concept. Let me share an example covered in the engaging Thinking, Fast and Slow:

Psychologists conducted an experiment with sets of dinnerware, Set A and Set B, with all dishes in the sets of equal quality. The sets looked like this: 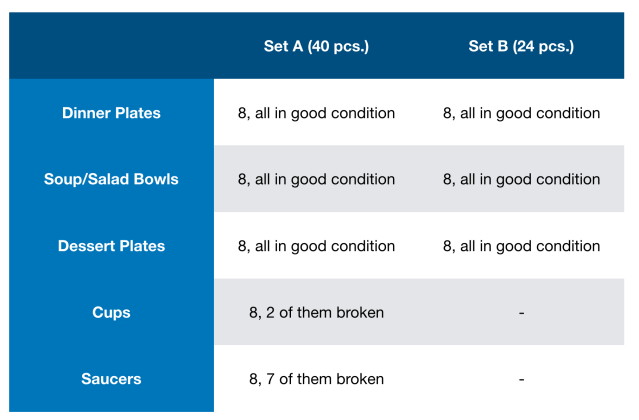 When people saw the sets together, they were willing to pay $32 for Set A, and $30 for Set B, which seems about right. However, when they were shown these sets individually, people were ready to pay $33 for Set B, and just $23 for Set A. That is, a whole $10, or around 33% lesser.

Because the average value of dishes in Set B is much more than Set A. Thus, when removing the 16 items (of which 7 are intact) from Set A, its average value is improved, thus also improving the perceived value, when perceived in isolation.

This has clear practical implications – for both buyers and sellers. When you offer something for sale, make sure the average value increases by removing the lesser-value things. Similarly, when buying, make sure you look at multiple options before making a decision.

I recently experienced this with my academic thesis at design school. I was building something with multiple features, and of course I thought all of them were pretty cool. But mentioning all of those to people (my academic supervisors, customers, design experts, friends) – got everyone confused. No one really seemed to get the core of my concept. It was exasperating. I found myself repeating – ‘that’s not what I meant’, or ‘don’t look at it that way’.

And then I decided to kill one key feature, and got rid of other less important features, and suddenly the thing took on a clarity, not just to others, but to my mind too ! Even when it was objectively a product with less power. Now customers felt more fired up by it, liked it, and gave clearer ideas to improve on it. Instead of trying to understand it, they got it. That’s when I knew – less is better.

This is why sometimes you need to remove features from your product, even if they make sense, even if they are useful. Because the customer will not see them. You are not falling into the ‘trap’ of thinking that your product with all its features is better, probably it truly is better, but your customers will just not see it (and you won’t see it either, when you evaluate other products).

Because people think in averages, not sums.